1994 Prof. Alena Macurová, as the first Czech linguist, published her first papers on communication of the Czech Deaf. While other professionals (doctors, teachers, social workers) relied on the “paradigm of deficit” – i.e. they viewed the Deaf as deficient individuals, namely deficient in hearing –, Prof. Macurová began viewing the Deaf as Czech Sign Language users and bearers of the related “visual culture”. Instead of seeking ways to “remedy or reduce their deficit”, she focused her efforts on fathoming the structure and functioning of the Czech Sign Language, its comparison with other national sign languages, its acquisition by Deaf children and teaching as a foreign language in courses for Czech native speakers, but also on describing cultural and social rules of the Deaf community, methods of teaching written Czech as a foreign language, on Deaf education in general etc. 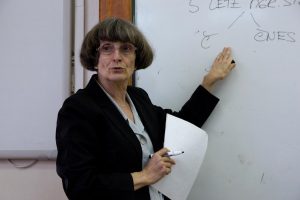 1996 launching of the interdisciplinary supplement for Czech Language and Literature students, who were offered courses in the Czech Sign Language, History of Deafness, Current Problems of the Deaf community etc.

1998 Deaf Studies programme launched in a four-year Bachelor’s degree form and a five-year Master’s degree form in combination with the Czech Language and Literature, with the Institute of Czech Language and Theory of Communication standing guarantor; from the very beginning, the programme has been pursued by Deaf students and staffed by Deaf teachers and, consequently, interpreting and note-taking services have been provided here.

2012 the Deaf Studies start providing interpreting, note-taking, transcription and other services for Deaf, hard of hearing and deafened students across Charles University’s Faculty of Arts

2014 (February, 1st) the Institute extends its scope of activity offering courses of English language for Deaf, Hard of hearing and Deafend students across the whole of Charles University. The Institute also takes charge of the Media Language Center at the Faculty of Arts.